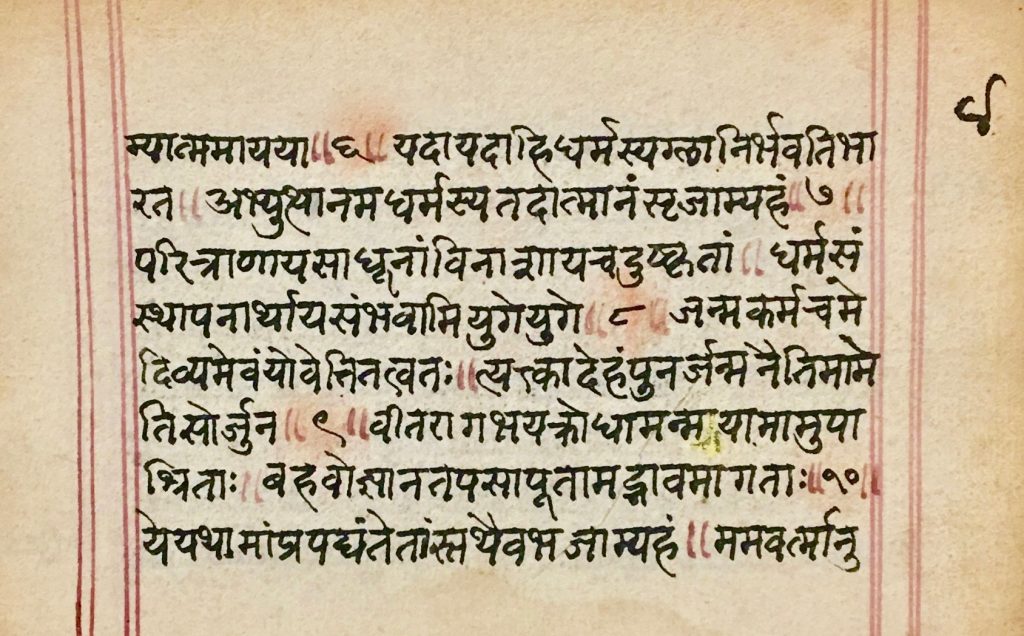 Sanskrit is a classical language of South Asia, it belongs to the Anglo Aryan branch of Indo European languages. Sanskrit is the sacred language of Hinduism and also the language of Classical Hindu philosophy, Vedas, Upanishads, Puranas, and Historical text of Buddhism and Jainism even. Sanskrit is the oldest of all languages to mankind. How can it be said?. Rigveda, the oldest written scriptures in the world is in the Sanskrit language. Scholars state that Sanskrit impact other languages such as Tamil, Greek, and Latin. These are all considered as ancient languages of the world. That’s, why Sanskrit is called the mother of all languages just because many Asian and European languages, find their origin in Sanskrit. Moreover, there is a beautiful story behind it, it is called “devavani” or the language of God. It is said and believed that “Brahma” the creator, introduced this language to the sages. Now the importance of Sanskrit is increasing scientifically. It’s a pleasure to say that many scientific reviews have highlighted the importance and scientific use of this language in present scenarios.

WHY SANSKRIT IS THE LANGUAGE OF SCIENCE.?

Ancient Indian scriptures like Vedas, Puranas, Upanishads, Ramayana, Mahabharatha written in Sanskrit. The most comprehensive anthropology, sociology, and psychology of the world, Ramayana and Bhagawath Gita which are in Sanskrit. Aryabhata’s Astronomical calculations have written in Sanskrit. But Sanskrit is not only used for texts, scripture, literature but it is considered scientific language. It is finest and accurate, the scholars say. Sanskrit letters in order are the acoustic foundation of chakras of the human body. According to researchers at NASA, Sanskrit is the finest language to be used and considered fit for complex fields like Artificial intelligence. where computers can be literally designed in such a way that they can think for themselves and not have to be completely dependant on human commands. UNESCO decided to add Vedic chanting in Sanskrit to its list of the Intangible cultural heritage of humanity.

RELEVANCE OF SANSKRIT IN MODERN AGE.

With Indian Yoga already gaining prominence in other parts of the world, Sanskrit is now being talked about in world-class technology. Artificial intelligence is affecting the future of virtually every industry and every human being. Artificial intelligence has served as the main driver of emerging technologies such as big data, robotics, and IoT and will continue to be a technological innovator for the future. Since the computer and its languages ​​are emerging from day to day, Sanskrit is considered the best language for programming. If we think of the Vedas as the storehouse of knowledge written in Sanskrit to understand it better, then mankind in the whole world needs Sanskrit.

Contributions to the rest of India in zero, decimal system, binary numbers, atomic theory, and so on. Moreover, Sanskrit is more important to Artificial Intelligence as NASA says. It is India’s contribution to the rest of the world. It is believed that people all over the world spoke Sanskrit by worshiping or chanting mantras. But today it is considered the best language for computer programming. According to scholars, Sanskrit sharpens the brain, enhances satoguna, and creates moral values, on the other hand, it is used in speech therapy. We cannot imagine India without Sanskrit. India’s excellence is not only rich in culture, traditions, customs, art, and architecture, but it is also proud of India because our ancient language Sanskrit has been approved by NASA for computer programming.

3 thoughts on ““Sanskrit is the best and easiest language to program Robots and computer programming”. Says NASA.”