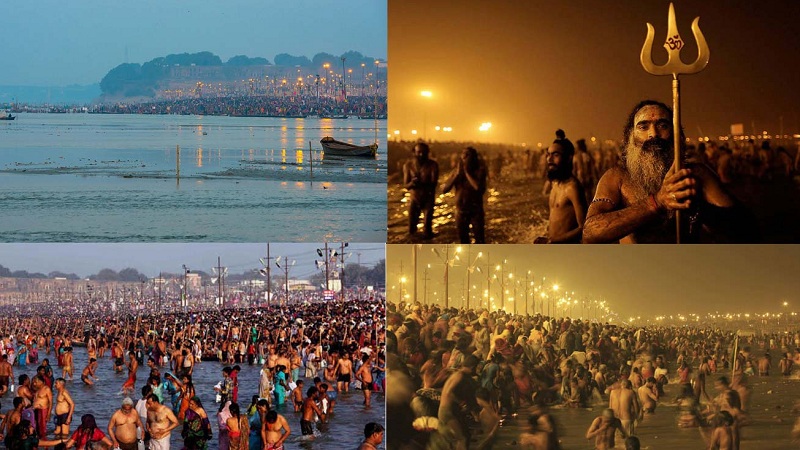 According to Hindu mythology, Kumbh Mela is an important religious festival celebrated four times over 12 years. UNESCO has recognized Kumbh Mela as an intangible cultural heritage. It is taken place at Haridwar on the Ganges in the Uttarkhand, Ujjain on the Shipra river in Madhya Pradesh, Nashik on the Godavari river in Maharastra, and Prayagraj at the confluence of three rivers Ganga, Yamuna, and Saraswathi in the Uttarpradesh. It is said that Kumbh Mela is the world’s largest religious and cultural human gathering. Devotes all across the world will take part in Kumba Mela. The name ‘kumbh’ is derived from the immortal poet of the nectar which Devtas and the Demons fought over. ‘Mela’ is in the Sanskrit word meaning gathering. According to Hindu mythology, it is believed that those who take a dip in the holy water of Ganga are eternally blessed, washes the sins, and moves towards solvation. After visiting the Kumbh Mela of 1985, famous American author Mark Twain said,” It is wonderful, the power of a faith like that, that can multitudes of old and weak and the young and frail enter without hesitation.”

TO GET MOKSHA, ONE CAN ATTEND KUMBH MELA.

Kumbh Mela is held every three years on a rotational basis in the Holy cities of Allahabad, Nashik, Haridwar, and Ujjain. The sadhus, Nagas can be seen here. All the pilgrims who wish to liberate for reincarnation, to get moksha can attend Kumbh Mela. Hindus believe bathing at the rivers will cleanse them of their sins and help them attain moksha. Many devotees went to the Kumbh Mela every year in the hope of attaining Moksha. This is one of the largest gatherings which is also one of the largest in the world. The Kumbh Mela pulls in upwards of 70 million pilgrims from around the globe. They come here to accomplish salvation from the unending cycle of life and death. Nagas do not wear any clothes, cover bodies with ashes. Urdhwavahurs put their bodies through severe hardships and shirshasins stand for 24 hours and meditate while standing on their heads.

It derives its origin from Hindu legends. According to the legend, a war between Gods and Demons, the reason was the nectar, which was produced was produced during Samudra manthan. To prevent the demons from Amrita, gods placed it in a kumbh or a pot. According to the legend the kumbh Mela held at four places because, when the divine carrier Garuda flew away with kumbh the nectar was spilled over four places Haridwar, Nashik, Ujjain, and Allahabad.

The five elements of Nature in one place.

Rituals of aarthi are the major attraction of kumbh Mela. Aarthi is attended by millions of people on festive days. The aarthi by a priest chants hymns with great fervor, which represents the importance of panchatatva earth, water, air, fire, and space. During aarthi on the river banks all these five elements to be present in one place. Devotees come to Kumbh to experience a minimal state of lifestyle, and worship the 5 essential elements of survival on the Earth-Fire, Water, Earth, Metal, and Wood. Triveni Sangam in Prayaag attracts thousands of migratory birds. These birds cover thousands of kilometers and arrive in October and flyback by the end of March month.

NAGA BABAS AND SADHUS ARE THE MEJOR ATTRACTION.

Naga babas renounced all material things and they are the devotees of lord shiva. They are always nacked. In common days it’s difficult to see these Naga sadhus but they are seen during kumbh Mela. During these times they perform extremely painful acts to prove their devotion. And sadhus gather to perform all kinds of feasts to show off their warrior skills with their weapons includes tridents, swords, and spears. The kumbh mela is 2000 years old. When the Chinese traveler Huan Tsang first documented kumbh mela 2000 years ago when he visited India in 629 – 645 C E.

India is a land of many colorful cultures, customs, dresses, languages, dance, music everything on this planet. India is full of wonders. For everything, there is a rich significance. The Indian cultures and customs have their vast geography. Religion assumes an essential part for individuals by driving their lives. Everything in this magnificent India is awe-inspiring, historical, and religious. Indian festivals, rituals are associated with myths. Our religious Hindu rituals highlight magnificent stories, truths, and Indian values. Nevertheless, we are blessed in this magnificent vast India.